We celebrated a very Lego birthday this week. I was so excited that Theo wanted to have a Lego-themed party, there are SO many cute ideas out there (like this, this, and this.)

Theo helped me with the invitations. The figure originally had a regular candle in his hand, and my backseat designer said, "The candle should be made out of Legos, too!" Of course, he was right. He brought me the flame piece so I could see what it was supposed to look like. 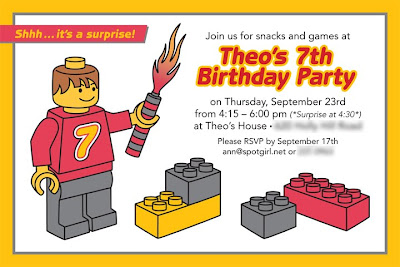 Surprise party? Yes. But more on that later. First things first: Lego wrapping paper. Clark tried to help me with this, but was cranky and quit after five minutes. This was super fun and easy, and I found that good acrylic paint worked better than the kids' washable tempera. 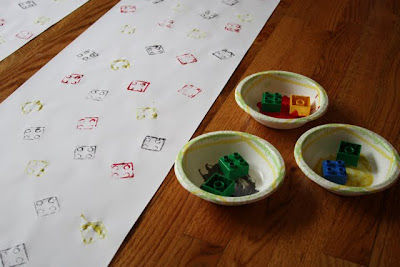 We had our family here over the weekend, so I got to set a cute table: 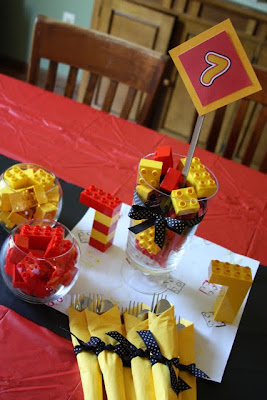 ... and I splurged for the coordinating color M&M's, couldn't resist. 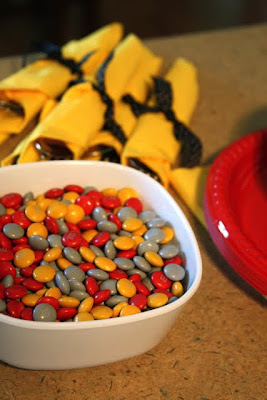 I also made little picks for the swirly cupcakes. 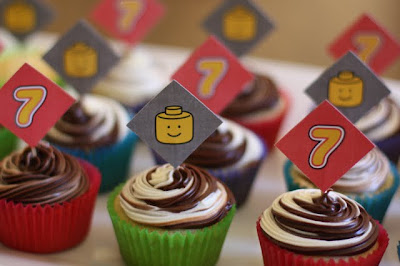 Now, here's where the insanity struck ... I found instructions to make a little folded Lego guy online and used that as the inspiration for favor boxes. These printed on a sheet of cardstock and were big enough to hold Pop Rocks, fruit snacks and a Lego minifigure pack. 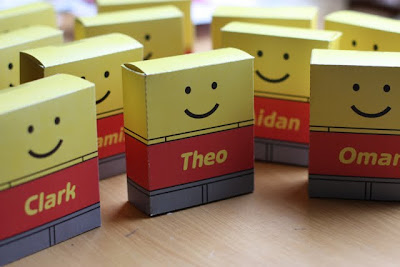 Want it? You got it. Download printable Lego Minifigure favor boxes here. 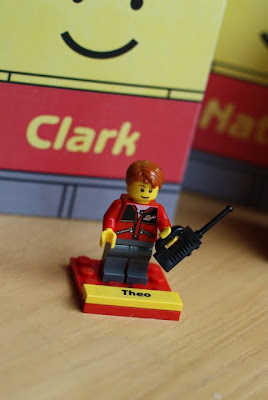 Only slightly less insane, but SO fun ... we ordered minifigure parts from the Lego website. An assortment of heads, bodies, legs, hats/hair, accessories and base plates. I used clear labels to personalize a name plate for each guest.

And for Theo's friend party, I made Lego head cake pops! 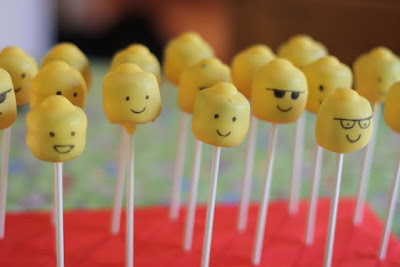 This was my first attempt at shaped cake pops. (Thanks to Living Locurto for the idea!) I used M&M's to make the little pegs on top. I had some trouble with the Wilton food markers, they did not go on nearly as smooth as I thought they would. Jeff thought they looked like boobs, but the kids knew what they were supposed to be, so (raspberry sound). 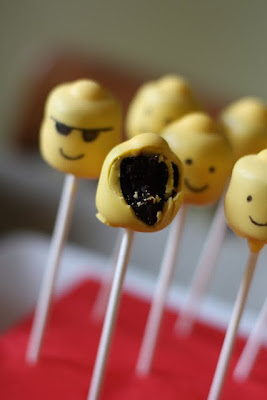 They were slightly wonky, but (high-pitched sing-song voice) dee-lish-ous! I used the extra chocolate to dip pretzel sticks. 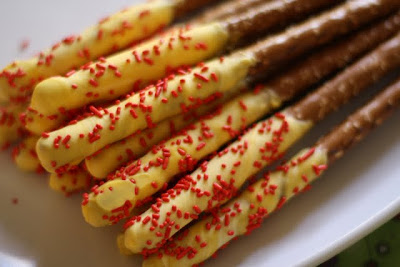 Snack table staging area. It was a gorgeous day, so we had the party and all the food outside. So much nicer than having ten 7-year-olds stomping through the house. 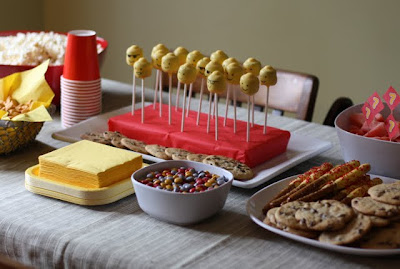 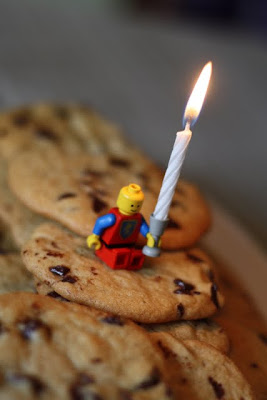 I borrowed my brother's old Legos from my parents' house so the kids would have them to build with during the party. I set up a gallery area and made round labels for awards (most creative, craziest, biggest, etc.) The kids LOVED the competition, and Dora loved handing out the awards. Everyone who participated got a title, and they were proud to wear their badges. (Seven-year-olds are not too old for stickers yet, yay!) 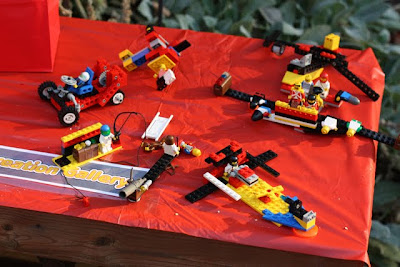 Here are their minifigure creations. They had SO much fun with this. There was a fair amount of chaos when they were putting them together - everyone grabbing at once - but I tried to move the dishes around the table and give everyone a chance at a first choice. 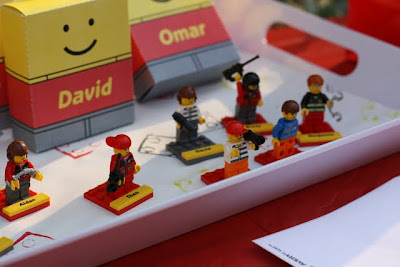 Okay, so the surprise. Dora REALLY wanted to have a surprise party for Theo. I thought it would be impossible to plan a friends' party without him knowing about it. Our solution was to plan the party for a Thursday ... but tell Theo that it would be on Friday. Dad picked up the kids from school and took them out while the guests arrived. Everyone hid in the treehouse for the big reveal, and Theo was really, truly surprised, it was so cool. Dora got many accolades for the great idea and planning.

And, OH! the party. It was such a boy party. They did not stop moving for 90 minutes. They shot baskets and played soccer and tossed footballs and hula-hooped. They wrestled and imagined a police chase and walked in the woods and played hide and seek. 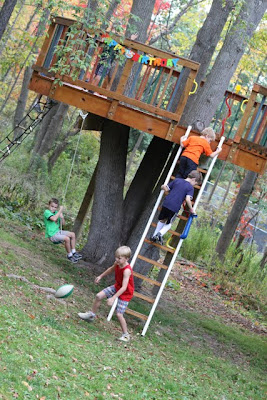 There was also a lot of treehouse play ... 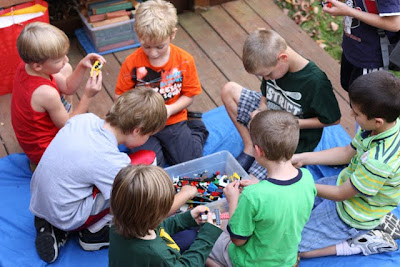 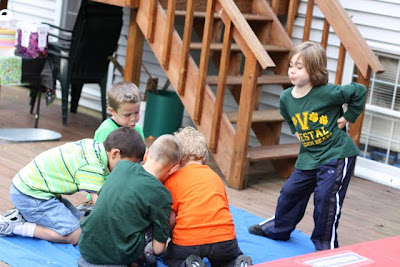 ... and potty talk (this is Theo making tooting noises for the crowd.) 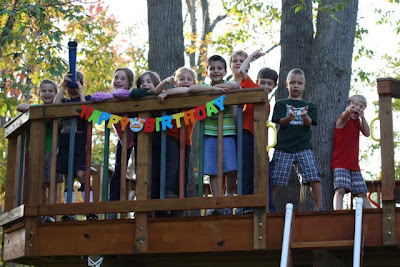 They ran and ran and ran some more. Most were all sweaty when their parents came to pick them up. Hopefully everyone fell asleep quickly tonight. I don't think they get enough opportunities for so much physical play, it was such a thrill to see them having so much fun. 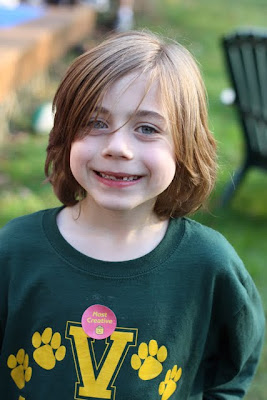